Today, Veterans Day 2019, we honor all members of the University of Maryland community who have served in the armed forces, past and present, but we also wanted to share some special veterans with you. 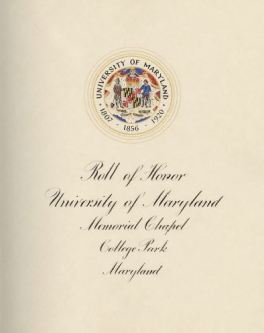 The names of over 200 brave Terps who lost their lives in service to our country are recorded in the Memorial Chapel’s Roll of Honor, which is preserved in the University Archives. You can view the digital copy of this beautiful ledger in University AlbUM. 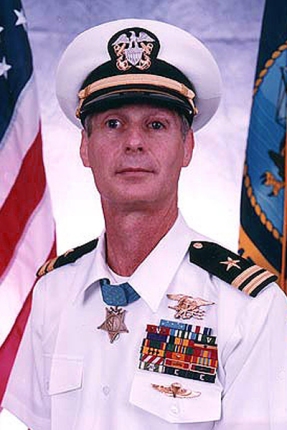 U.S. Army Captain Groberg, Class of 2006, was honored for his life-saving actions as the commander of a security detachment in Task Force Mountain Warrior in Afghanistan in 2012; you can read his medal citation here. Forty years earlier, Navy Lt. Tom Norris, Class of 1967, led a five-man patrol in Quang Tri Province in Vietnam to rescue two downed American pilots.; you can find his citation and a video about his military career here. The bravery and courage of both men have been recorded in recently published books, 8 Seconds of Courage and Saving Bravo.

Finally, while working on our forthcoming update to the Alumni of Note list included in MAC to Millennium: University of Maryland A to Z, we found a few additional, very special veterans we wanted to highlight:

Robert Sinclair Booth, Class of 1936, was the first University of Maryland student killed in World War II.  He was aboard the USS Arizona when it was attacked and sunk at Pearl Harbor.  The Navy honored Ensign Booth by naming the USS Booth, a destroyer escort vessel, in his memory.

Richard Durkee, Class of 1959, was a highly decorated veteran of Army service in World War II and Korea. One of the few survivors of the 551st Parachute Infantry Battalion during the Battle of the Bulge in World War II, he also was awarded the Distinguished Service Cross, second only to the Medal of Honor, for heroism during an attack near Uijongbu, Korea. You can find more about his military accomplishments in his obituary from the Washington Post.

Ann White Kurtz, who received her M.A. (1951) and Ph.D. (1956) from Maryland, was an early member of the Navy’s WAVES (Women Accepted for Voluntary Emergency Services) who worked as a decoder to intercept and read messages sent by the Nazis during World War II and helped to break the code of the Germans’ Enigma machine. A  2018 article published by Kurtz’s undergraduate alma mater, Wellesley College, details some of her wartime experience, and her story is also included in the 2017 book Code Girls by Liza Mundy.

We thank each of the brave men and women from the University of Maryland for their service and honor them this day and always.