When you first step onto the University of Maryland campus as a new student, one of the last things you might expect is a handbook of rules specifically for your sex. Up until the late 1960s, that’s exactly what new female students were handed. “To Do Or Not To Do” and “Information Please!” were handbooks that outlined the rules and expectations for newly admitted female students. These handbooks were distributed by the University of Maryland Women’s League and Associated Women Students, respectively. New female students were automatically made a member of these organizations upon enrollment at the university.

While the guide outlined many standard rules we may see today, such as general policies, dorm hours, fire drill procedure, and quiet hours, female students were given a particularly strict and detailed set of rules. In the 1937 and 1940 issues of “To Do Or Not To Do,” every social interaction had a given set of instructions. If a girl was unsure how to go about introductions, flirting in the library, how to behave in the dining room, and rating her date, she simply had to turn to the handbook for her answers! Each handbook let a girl know that if she did not conform to the standards, she ran the risk of seriously embarrassing herself.

Throughout the 1950s, leaving your dormitory after 8pm was quite a process. Any girl who wanted to leave the dorm after 8pm needed to obtain permission and note when she would return. After 10pm, it really became an ordeal! Girls were only permitted a certain number of these “late leaves” per semester, which were determined by class and GPA. Weekends were much easier to stay out late, with 1am curfews. If you were late, you ran the risk of being “campused,” the college version of being grounded, unless, of course, a girl called her house director and the campus police. Imagine being 22 and still having to obtain parental permission sleep somewhere other than your dorm room! 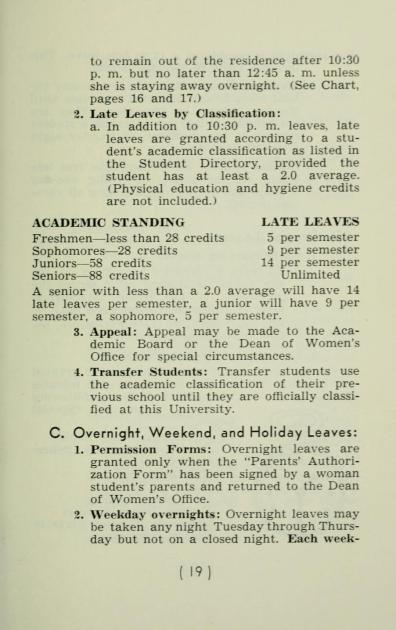 Running the risk of getting grounded was not the only thing a freshman girl had to worry about. Dress code was outlined to a T until 1967! Shorts, slacks, jeans, and other sportswear were forbidden anywhere on campus, unless the girls were in a location where sports were being played. In the 1964-1965 handbook, the dress code became even more specific. To attend dinner on weeknights, skirts or dresses were required. In 1937, the handbook noted that there were 40 or 50 formal dances at the University, so a girl had to be ready with her formal attire! Sunday breakfast and dinner demanded a dress, or coordinated outfit, with pantyhose and heels. A skirt and blouse was considered standard attire for the classroom and everyday campus activities.

Interestingly enough, students helped establish some of these rules! Female students in conjunction with Dean Adele Stamp made up the AWS board who regulated curfew, dress code, and visitation to fraternities. But, as the wider culture changed, the AWS soon followed. By 1968, there was no dress code, and by 1970, students successfully had the curfews eliminated. While the AWS continued to put on very traditional events like their annual Bridal Show, more contemporary events made their way into the organization. Around the same time as the elimination of the dress code, the AWS began sponsoring a Sex Symposium dealing with contemporary issues involving sex and morality.

It would be an understatement to say that we have come a long way since the handbooks of the 1950s and 60s!
You can see more student handbooks like “Information Please!” through the University Archives website at https://www.lib.umd.edu/univarchives/digmaterials